Last Thursday was my birthday so I turned the big 27 on September 11th. A day made infamous 13 years ago and again chosen to be my sister’s wedding day in 2009, it’s not far off to say that I don’t have the chance to do much of anything on it when it comes around. My day started out with my mom treating me to lunch, an event that usually coincides with celebrating my sister’s wedding anniversary as well. It was originally planned to be just my mom and I, but my sister and youngest niece joined us as well. Lunch was filling and my mom presented me with both new towels and sheets for my new bed (which is on layaway and still waiting to get paid off).

My next stop was to the Book Arts Center, the non-profit I’ve been volunteering at for 2½ years. We have a tradition where we split gourmet cupcakes to celebrate everyone’s birthdays as a way of celebrating. Two of the staff wished me a happy birthday before-hand and when I arrived, while the last one did as an afterthought after we locked up and he rode off on his bike. They didn’t do anything for my birthday and I immediately felt super bummed. Maybe I was more hurt because it was something I was really looking forward to, but it just seemed like they didn’t care enough to even bother. (Side note: I went in the next day to finish up some projects and nothing was said by anyone about it.)

(e:yesthatcasey) had asked me earlier in the week to let him know how I wanted to celebrate, so I told him all I wanted was a nice, chill evening spent relaxing. Casey, our roommate Brad, and I began the evening playing Castle Risk with the aid of some quality vodka. (e:terry) stopped by shortly after to partake in our mellow night. Casey dominated in Castle Risk and (even with helpful advice from Terry) he wiped out my castle before overpowering Brad in any chance of retaliating from his attack. As our night continued someone mentioned playing frisbee; while I cannot remember how it came up we all decided it would be best to play out on Colonial Circle at around 1:30 AM with three frisbees in hand. It was a perfect night to be outside and even with our delayed reaction to catching or misguided accuracy at throwing, we had a good time. Terry headed home and the three of us crashed, not worrying about waking up any time soon.

I’m still a bit bummed that I didn’t get a chance to celebrate my special day with friends and family with a cake (or cupcake substitute) purely out of the symbolic thought behind it. Maybe it’s dumb because in retrospect it’s such a tiny tradition and not what birthdays are all about. Regardless, I didn’t let that ruin my day in any aspect. I had a great night bonding with my roommates and Terry, and it solidified the fact that I am now somewhere I belong living with some pretty great people.

Tuesday night there was a show up at Stamps (...the bar) in Tonawanda. Weeknight shows aren’t too uncommon, but they’re hit or miss in terms of attendance. The acts playing that night were Avidd (they’re relatively new to our particular scene, but they’ve got spirit), Radical Operations (I’ve made flyers for at least 10 shows they’ve been on, but have yet to officially meet them), Seven Thirty Seven (also fronted by Vader Mike), Accidentals (three of my most favorite people in the world), and The Howl (from Chicago). The show turned out a good number of attendees for a weeknight (maybe 50-60 people), with a sizable chunk of the group being mostly regulars from our crew.

The night, however, had a special meaning to me more than anyone else there. I had the honor of meeting The Howl back in January of this year as they played the first show I made a flyer for since October of 2013 and also the first show I had been to since that past summer. The show was at “The Lair” on Niagara St., another basement venue that is best associated with hardcore shows. I bonded with Sam who does lead vocals/guitar for The Howl after being introduced as the one who drew up the flyer. Sam and I had shared interests in printmaking and he also worked with a non-profit similar to the one I volunteer at. They played a great set and I made sure to pick up one of their CDs despite my poverty; it is still one I listen to on repeat. Two of the other bands on the bill I got to meet were [link=onthecinder.bandcamp.com]On The Cinder[/link] and Accidentals, both bands who have become invaluable in their friendships and major driving forces in supporting my freelance work. The show was a blast and a major turning point in my life; from that night on I vowed to attend every show I designed a flyer for and to work hard to get my name out there.

Tuesday night’s show was an awesome and sweaty good time, but more than that it was a reunion to me and reminder of the friendships I’ve built since that cold, winter night in January. Sam recognized me right off the bat and we both caught up with what has been happening in our lives since our last parting. On The Cinder came out to support the show and dragged almost everyone else from The Flower House (another house venue, and most recently a temporary home for me) with them. I kept on going back in forth in my head, comparing both nights and how far I’ve come since then. I was in a bar listening to music with a bunch of my friends, a complete 180 from not knowing a soul outside of my best friend who booked the shows I did flyers for.

The show ended and with new t-shirt, pin for my hat, and stickers in hand from The Howl, it was time to head back home. Everyone (including The Howl) was headed back to Flower to decompress, and after initially planning on just going to bed I decided to stop by as well. I hadn’t seen Sam and the guys since January, so I didn’t want to miss hanging out with them for a little bit more before they left for their next tour destination. We all chatted, I showed them some more artwork I had done, and they asked me a lot of questions about Buffalo. Forest Gump was put on Netflix and as everything quieted down I finally took my leave to get some rest myself. The boys of The Howl (Sam, John, John, Ryan, and Chris) are some really awesome people, and I look forward to the day when I can see them again. 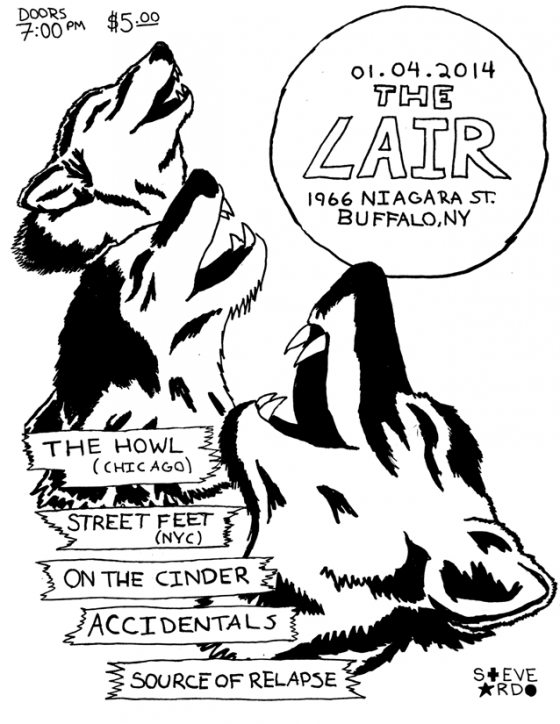 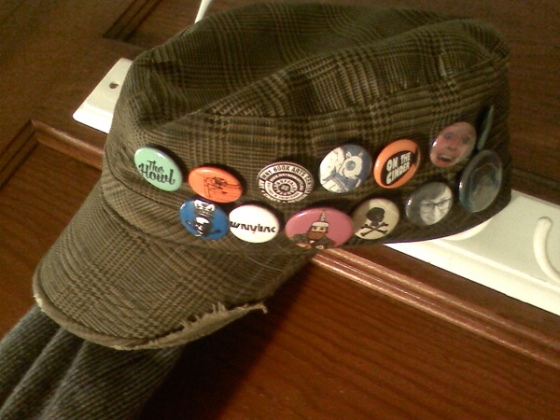 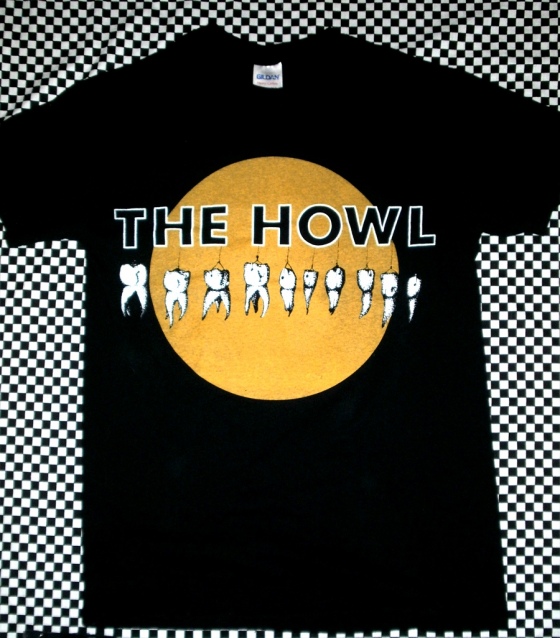 Thanks, and I’ve thought about it. Originally I was going to have music notes to denote the different bands went with wood instead. So yeah, it’s something that could actually happen.

Ya can you make those three wolves into a tee-shirt.

That wolf flyer is awesome.

Today marks the 3rd week since I moved into (e:yesthatcasey)’s apartment with him and our other roommate Brad. The emptiness that is my bedroom is slowly being filled with furniture that’s being donated or found online, but in time it will all come together and I’ll finally be settled. My first actual full day in the house I had the strangest feeling of déjà vu while sitting in the kitchen eating breakfast, and strange as it felt at that moment it seemed perfectly natural. I met Casey and the rest of the crew downtown this past Friday night and he informed me of 2 things that were hidden in the lease but required: 1.) to be his wingman when we go out and 2.) ditch my camera phone and actually obtain a smartphone like the rest of the modern world. I think I can handle both of them. Man, it feels good to be home.

I’m about 10 years behind the rest of the world technologically. Up until 2 years ago I still had a flip-camera phone.

I didn't even know there were other types of phones still.

I’m a freelance graphic designer/illustrator that works primarily with local “DIY” bands in Buffalo which encompasses a lot of what’s considered the punk community here. I’ve been designing hand-drawn flyers for basement shows throughout the city since March of 2013, and it’s given me a chance to connect with local musicians and make a lot of friends. One of my best friends introduced me to this scene through shows that he booked for his own bands; one is an instrumental gypsy band called [link=hangbobewell.bandcamp.com]Hang Bob Ewell[/link], and the other is a pretty well-known ska band that goes by the name of [link=bsidebasterds.bandcamp.com]B-Side Basterds[/link] (he plays sax in both).

The “Basterds” are fronted by a cool guy who goes by the name Vader Mike, and I’ve had the privilege of getting to know him more the these last few months. Tonight (Saturday) they played a show at Mr. Goodbar on Elmwood along with The Blank Shots and The Naturalists, both other local bands. I met up with some friends, grabbed a few beers, and skanked the night away. B-Side played the last set of the night, and with 3 songs left on their set list Mike took the mic to give thanks to the other bands and others who made the night possible. He also gave a shout out to our friend Mitch who ran The Crow’s Nest, which is sadly now-defunct, but was one of the prominent house venues within our group. To my surprise Mike then gave a special shout out to me for coming out to see them play and singled me out in the crowd for all the art I’ve made for them. Their set ended with a bang and I thanked him. His reply was that he appreciated my hard work and would do what he can to make sure I received recognition. My night ended on a very hot, sweaty, and beer-tastic note, but I walked back home feeling like a million bucks.

I have some really cool friends. 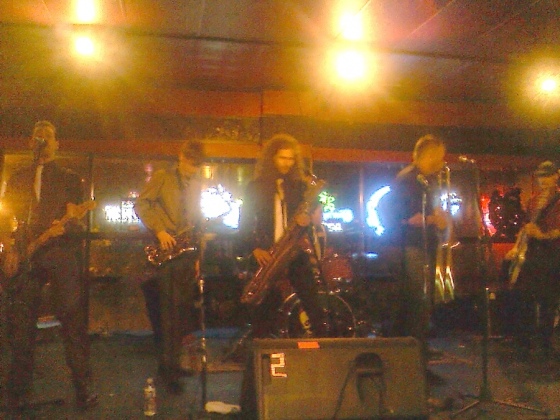 Sounds like a good time. And definitely good exposure for your work

That's awesome. Its great to feel recognized for your work.