After my last post, Paul asked me why we were being so violent to our walls. "Didn't the existing walls provide adequate shelter from the elements and unwelcome intruders with possibly nefarious intentions," you might ask? Well, yes. However the previous owners, in their infinite wisdom and seemingly infinite scheming to cut corners in order to save money, decided that when the plaster started drooping from the walls (due to the fact that the plaster keys inevitably seem to break out of the lath after 100 years or so) they would just get drunk and splatter stucco everywhere to hold it up. You can see the result below, which we've been saying is texturally somewhere between lemon merengue pie and the roof of a cave. 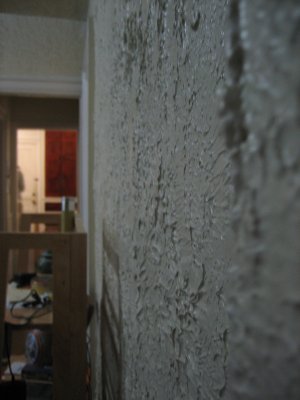 All of the walls were still bulging out under the lemon-merengue stucco, and one room was covered with appalling panelling. The walls also covered wiring that was either very poorly installed, or 100 years old and put in when the house was built. We had no insulation so gas bills were really high last winter. Between the combination of a former tenant in the apartment that apparently never cleaned in the seven years that she lived in the apartment we're inhabiting, and an absentee landlord that created his masterpieces under the influence, our house is pretty much a disaster.

For all of these reasons, we figured that the easiest thing to do would be to tear out the walls and start over with drywall. We already did this in one room and we're pretty impressed with the result. It's hard living in a house that you're remodeling because of the dirt and the fact that right we're living with only a few lights in the back of the apartment due to the fact that I had to cut out a major electric circuit in order to install new wiring, but things should be much better soon.

Anyway, we have our dumpster outside for one more day, so I'm back to tearing out the remaining walls.

Thanks Paul - I was thinking about bringing it myself at some point. But I knew that we would have lots of trash. I don't know how many tons it was yet - I guess I'll find out when they charge me - but I'm sure that it was over the three tons that were removed with the base price of the dumpster. We filled it to the brim. Amazing that you can take that much crap out of your house and have it still able to stand up!

Since we bought our house we have removed about 3 tons of garbage. I know this because they weigh it at the transfer station we brought it to. The first 2 tons are free for tax payers. I know you already have a dumpster but it might be cheaper to rent a giant uhaul and cart it to the transfer station yourself. That's what we did. We just stored it all in piles in the garage until we got the uhaul. I guess this requires having a garage or somewhere to store the trash. The transfer station is on South Ogden in the Love Joy district.

Not sure if "e-stripper" is the appropriate way to refer to people in this community, but I wanted to introduce myself to the community and it just rolled off my tongue. :)

At any rate, I'm a grad student living in the Elmwood area and I came across this site a while ago. Although I'm currently working on my PhD in Spanish Literature, I have a degree in Computer Science and have always been a geek at heart. I originally came across this site last year and was impressed with the way that Paul pulled things together, technically speaking, for the site, and also how it seemed to be an active place on the Internet for a community that has a tie to a particular geographic region.

I also just bought a house in the Elmwood area, and it's a real fixer-upper (as are most places formerly owned by absentee landlords, from what I've seen). Yesterday we got a dumpster delivered and I had some friends over to help clear out a few rooms. We'll be busy for a while with drywall, as you might be able to imagine from the video below:

This summer since I have a bit of a reprieve from academic work I'm also thinking about helping Buffalo to be come a more Internet-friendly community. For this reason I started a group called Buffalo Wireless (http://www.buffalowireless.org). I'll write more about this later, for now it's back to trying to fill the dumpster occupying my front yard (I told the neighbors it was a new swimming pool): 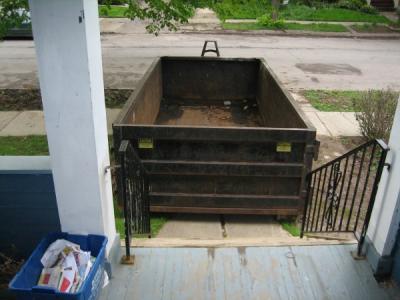 Why are you taking all the walls down? Are you putting up drywall instead of plaster?

I fixed the video for you. You only need the video ID between the youtube tags. estrip strips out html for security reasons.