The next QCRG roller derby bout is on Saturday, May 19th at the Rainbow Rink in N. Tonawanda. Doors open at 7 pm, bouting starts at 7:30 pm. It's the Devil Dollies vs. Suicidal Saucies, and both teams are undefeated for the season, so far. Yeah, we've only played one game each, but let's face it, no one likes to lose.
The Devil Dollies (my team) had a great practice yesterday, and we're ready to BRING IT.

I'm really excited about this bout, because I love to play derby, and I love to put on a good show. However, there is a little pressure for me to really bring my A game on Saturday. My parents are driving up from Syracuse to see me play! Ahhh!! I'm excited to have them there, but I really really really (did I say really?) don't want to lose in front of them. Not only are my parents driving up to see me, they've also spent money on a hotel room. So yeah, no pressure there. *sigh*

Gah! I can't wait to get out there and play some derby! There are some new moves I've been letting stew in my brain, and I can't wait to bring them to fruition on Saturday. I'm not going to reveal any secrets, but the Saucies are going to have a hard time getting out of bed on Sunday morning. Bwahahahaha....

If you come out to the bout on Saturday night, cheer for the Devil Dollies and me, C.N. Red! Even if you've never seen derby before, this is going to be a great show!

I keep trying to write this entry, but all I can think of is the poem 'Casey at the Bat'. It's not that my team lost, but it was just a good fight, and the other team had a lot of injuries, which is a good reason as to why we won. If their whole team would have been playing, I'm sure that they would have won, or that the final score would have been a little closer. Either way, Saturday night was a lot of fun, and I think we gave the fans a good show.

Btw, I don't remember of I've mentioned this earlier, but I skate for the Devil Dollies. My skating name is C.N. Red, and I'm lucky number 13.

And now, for some pictures from Saturday night!

Here I am jamming. A jammer is the person with the two stars on her helmet that can score. There is one jammer for each team, and they're the only players that score points. (I'm in the black uniform) 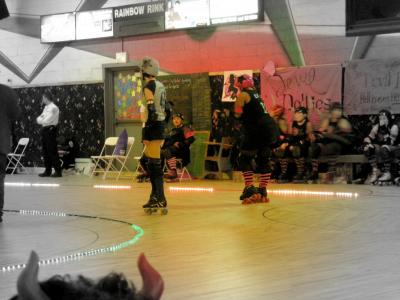 A little group meeting before we start. 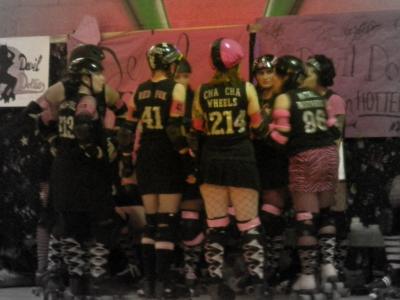 And they're off! If you look closely, you can see B-17 (aka, dragonlady7). I'm behind her with the pink and black leg warmers on. Yes, I said leg warmers. 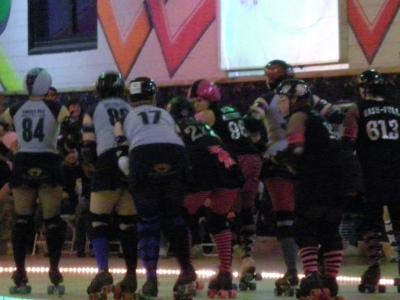 There aren't any action shots, because they all came out pretty blurry. Maybe next bout! The Devil Dollies are taking on the Suicidal Saucies on May 19th. It's going to be a rather heated battle, so it's definitely worth checking out!

First of all nice pictures and thanks for putting them up. Secondly if you like the Poem Casey at the Bat you might like to know (assuming you don't allready) that there is a book based on that poem about mighty cases and it is based on the premise that the 3rd strike is droped. I read the book it what feels like ancient history it is by Frank DiFord or however you spell it he is the guy who writes for sports illustrated.

Awesome pics! I'm excited to check you ladies out when we move up the buffalo in a couple months - We have the Hudson Valley Horrors down here in this half the state...

Eating Healthy in Buffalo is the Pits!

Trying to eat healthy in Buffalo is like having an AA meeting in a bar. Between Duff's, Jim's Steakout, and Anderson's, there's just no way I'm going to win the battle of the bulge. Yeah, I could get a healthier choice or eat smaller portions. But really, when your friends are swigging down pitchers of beer and annihilating buckets of wings, eating a chef salad with dressing on the side just doesn't cut it!

I guess all of this just means I'm going to have to get even more time in at the rink and larger pants!

I heard somewhere that Western NY leads the nation in heart disease. Considering the number of pizza & wing joints up here, one every 100ft as required by law, I have little doubt that this statement is probably true.

I agree- there's just too many wonderful unhealthy restaurants in Buffalo. They are amazing, there is just nothing else to it. Plus, all that great greek food.

Mmmmmmm poutine.
Now I want some.

Oh crap! I just realized I forgot to eat lunch. So much for eating small portions at regular intervals...

(e:paul) won't help you much-- half his blog posts are photos of the yummy food he eats!!!

I hear ya. There are [rare] times when I do not want to sit down to a plate of deep-fried chicken parts covered in sodium sauce and a side-order of poutine. Check out the following restaurants:

I think it is compounded by the fact that it is so cold most of the year and eating is the main social activity.

haha...I definitely agree to some extent. But there are always ways to eat healthy. Salads, soups, no dressing, diet soda, blah blah blah. But you're right, there's so much delicious, unhealthy food around this place!!!!

The beginning of another week, the beginning of another blog. I swear I have blogs to match every day of the week, kinda like underwear. Monday I'll use my estrip blog, Tuesday I'll write in my LiveJournal, Wednesday I'll put something or another in my Vox blog, and so forth. It would probably be smart to stick to one or two main blogs, but I'm rather indecisive, if you couldn't tell. The only things I've stuck with for more than a week are my boyfriend Andy and skating for the Queen City Roller Girls. Hopefully this blog will also fall in that category.

So many things to get done, and so little ambition to do them all. When I'm not slaving away at my job, I'm putting another forty-or-so hours into roller derby stuff. On top of practices this week (there's usually three), I'm making thirty armbands for my teammates, spray painting some pitchforks for my team's introduction on Saturday night, hosting a meeting at my apartment for the bylaws committee, and doing whatever miscellaneous stuff needs to get done before the bout. Needless to say, I won't be getting much sleep the next few days. It will be *so* worth it though! Skating out and hearing about a thousand people cheer for you is pretty spectacular!

With that said, it's time to get my ass in gear. And I don't mean derby gear, unfortunately.

Welcome to (e:strip)! Hope you find just as much time to journal here as everywhere else.

(e:dragonlady7) says she has no idea where i can get an average pair of decent rollerskates -- she only knows where to get the expensive ones. Do you have any leads for me to follow?

Well hello there!
What a coincidence-- I just was telling Lizzie and Sparkles about this place. (Well, actually, I was telling them about (e:paul)'s mansion, as we were discussing buying real estate in the City of Buffalo, and when Lizzie asked what someone would do with all that space, I explained the (e:strip) parties, and then had to explain (e:strip)....